Staff member
All the enhancements to Lamination PRO are now complete and I'm just putting some finishing touches on it. It has a new Help file which has been sorely needed. One new View that I started on about two years ago but didn't have time to finish it is a Southwest View. It will take the current board (1st generation, for example) and cut it horizontally and then reassemble it by flipping the thin strips edge-to-edge. With the new graphics engine in the software, this process became much easier to implement.

It allows you to specify both the width of the strips and the width of the center strip. Since a multi-generation board has 'ears' on both edges, cutting it perfectly through the center can be difficult. Instead, it is easier to not worry about hitting the dead center and instead cutting the board two times - first with the ears from one side next to the fence and then from the other side. This will make sure that the center has been cut uniformly. Because of this, though, the center cut will not be the size of a single kerf. This becomes a design opportunity and so you can specify the width of the center cut as well.

As with all the Views in Lamination PRO, once you are looking at your design, you can change any of the parameters of any prior generation and see the change in real-time. This lets you change an earlier angle, flip/flop, width of cut, etc., and immediately see the change without having to leave the current view. As with all the Views, you can either export a single element to a file or directly into Woodturner PRO.

When I get the chance, I'll make a video tutorial of this. In the meantime, here are three pictures of feature rings, all made from the same laminated board. The first two made from a 1st generation board and the third from a 2nd generation board.

Lloyd, are these designs in the sample file. If so, what are they called. Wayne

Staff member
Free upgrades are for anyone who has purchased software in the last six months which is a standard period for software upgrades. This is the first time in 10 years that I've charged for an upgrade, but without the opportunity for upgrade revenue, there wouldn't be an upgrade. The good news is that v3 Laminaton PRO is an order of magnitude better than the past version.

Lloyd, Earlier in this thread you told me that the .lam files pictured in this demo were contained in the "Samples" Folder. I do not have a folder with that name. I do have a number of files that were provided as samples in the previous version which are still in my project folder. Please list what files I should have as part of the samples folder and what files were used in the pictures below as part of this tutorial. As you may have guessed, now that I am making the Indian Blanket I decided to play a little. It looks like the file you used for the Symposium demo is nearly identical to the Indian Blanket with just a few cutting mods. Also, I thought that in a recent post there was some discussion of how many repeats you get from a design. I cannot find that. Please let me know if it exists or if it was reference to some other part of the program. I made 2 24" strips of lamination which I hope yields at least 12 patterns.Wayne

Staff member
The installation of Lamination PRO creates a folder in 'Documents' (or 'My Documents') named 'My Lamination PRO'. In that folder, there is a folder that has some sample .lam files. The contents of that folder differ depending on when the software was installed. It does not contain the Indian Blanket .lam file. That attachment was made to the thread in the Software Tutorials category.

I just opened that .lam file and set the target repeating units to 12 and it says that it requires 57.48" of lineal laminate so your 2 24" strips will not be enough - especially since there is waste involved in two strips instead of one.

I would make one more 24" strip and you should be all set.

I cannot come up with the 57.48", can you explain how you go that as I get a number in the 40s. By actual measurement if I change my first cuts to 1 3/8 I can get 12 slices from each 24" board without disturbing the design if I make the strips 1.1 there is no distortion. Making more strips at this point might cause issues of making them exact, but I may try. A list of the sample files would be nice just to see if I have them all. I have the Indian Blanket from the tutorial. Thanks, Wayne

The Indian Blanket.lam file that I posted uses a cutting width of 1.5" which means that the repeating unit is 3 inches and the cutting angle is 45 degrees. A SW design is made from first generation repeating units. If you change the Repeating Units field in the left column to 12 and then go to the first generation and click 'Details', it should show you 57.48" of lineal laminate required. This is the bare minimum and does not allow for waste.

You can drop the angle to 30 degrees and you'll get a very interesting design, it just won't be identical to the Indian Blanket in John's Turning unless you make the cut at 45 degrees. You can also drop the Cut Width to 1" and you'll get a repeating unit of 2" and this will require 40.51" of lineal laminate and if you're very careful, you *should* be able to get 12 segments of the design from 48" inches of lineal laminate.

Lloyd, This thread is getting longer, but I feel it has value to other users. I have all of the files listed from previous installs except that my sweetheart file is called sweetheartclock and I am missing rocket ship. Is the clock an older version? I also have 2 versions of bird design, one called improved. Perhaps you could separately e-mail me the missing or newest versions. As to the length of material needed issue. When I do what you describe I get a different result. I assume that when you say change the "Repeating Units" field you mean what is labeled in my program as "Elements", if that is true then I get a result of 40.24". This seems correct to me because for each 24" piece of lamination I want to get 12 pieces which would yield 6 finished designs. 12 cuts of 1.5" plus 12 kerfs of .125" comes to 19.5" with no waste. My actual measurement of stock is 20" which is consistent with the 40.24 result that I see. I will be cutting the first generation just as soon as I post this so I will know for sure, but I don't understand the discrepancy. Happy Th, Wayne

OK, I figured out the arithmetic. Sometimes it just has to be visual before you see it and sometimes you just smack your head and say "Duh". I was measuring linear cut width not segment width. Using 1.5" of linear resulted on 1" slices (45 deg). Since the design still works only smaller I have decided to proceed rather than try to make exact additional laminated stock. I have cut the boards and they look fine, ready for glue. I will post a picture of the finished design when I'm done. Hopefully cutting the strips will work out OK. I still don't understand how you see a result of 57.84 and I see 40.24. I need to understand this so I can make the correct amount of laminate with waste for the next project. Thanks again, Wayne

I have been following this thread, as I always seem to make my laminations too short. When I open the Indian blanket lam file, I input 12 repeating units leaving the strip and center width at .125", 1 1/2" laminate cut length, 45 degrees cut, and get 54.98" total length needed. I attached a screenshot to show the settings. Wayne, I also tend to forget to figure the segment width instead of linear width in my planning, that was before I started using this software. Hopefully the screenshot will give a clue as to why your readout is 40ish inches. 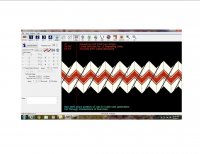 Jeff, Thanks for trying, but I am unable to duplicate your screen shot. When I am looking at the 1st generation I do not get the SW info below it. When I'm in the SW mode I cannot get any info. I have duplicated all your settings even though you have not changed the strip width or center strip and you have 5 cuts. I guess I must be doing this in the wrong order or not saving something before proceeding. Just in case, I am using version 3.0.0.0 build 3.0.088.Wayne

I would download the newest update 3.1.008 http://download.woodturnerpro.com/software/v3/lampro/lamprosetup.exe and then see if the numbers work out. Lloyd worked out some kinks a while ago, and I wonder if you still have the old calculations built in.

Jeff, That fixed it. I downloaded it the other day and it saved but didn't run for some reason. All is well. I also now have the sample folder. Thanks, Wayne

Glad it worked out. Happy planning and turning.

For those of you who have been following this thread.

I started out trying to make an Indian Blanket design. I made many mistakes along the way. I misunderstood the cut dimension, had some clamping issues, had an old version of the software which gave me a wrong calculation of stock length, etc., etc. What I came up with was not per the original design. However, the pieces looked good enough to use. I only had 12 (stock length issue) so no spares. I don't know what kind of vessel I will eventually use it for so here it is. I expect the next versions will be much better. This exercise also helped with my gluing and clamping techniques for the future for multi generation designs. Thanks to all who offered help. Special thanks to Art for his track/clamp design. I will be building one before the next time I do one of these. Very busy right now converting the Jim Duxbury kaleidoscope plans to something that makes sense for segmenting. I'll post that soon.
Wayne

Staff member
I'd call that a successful first attempt, Wayne. It's probably best that you got all the issues resolved on your first effort. From now on, it will be smooth sailing. I've been pleasantly surprised at just how quickly you can make SW designs. They are simply first generation boards cut into strips and re-glued.

What's so difficult about that?
:->