I am trying to print a project on my WTP program. I choose print and got a proper preview of the project as any normal print preview. I made sure the paper was A4 format which is what we use here in Norway. I ordered the print and got just a couple of rows beginning from the top. The last(top row) which is a solid walnut disk turned out black and the first segmented row printed out ok color-wise except for the walnut segments which again were black. The rest of the vessel was not printed at all. 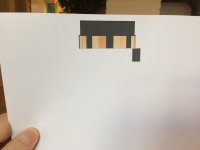 My printer is a Samsung laser printer CLX 4195. The latest drivers are updated in my windows 10 computer. I have printed out documents with it and there has been no issues with that. I also use this printer with my MAC and have never had any problems with printing graphics. Any help is appreciated.

There isn’t much I can do to help you with this. We simply render an image (the one we show on the screen) and then hand it off to the Microsoft Print System which performs everything downstream. We never even know (or care) what printer you have or what its capabilities are.

Since international printers, paper, characters, etc., are all involved, I am more surprised when it works than when it doesn’t. A large software company would tackle this problem and find a solution. My software company that consists of me says to use an alternate approach - take a screen capture of the image and copy/paste it into your image editing software where you can crop it, resize it, and print it with more printing options than you could imagine.

Sorry I can’t help but there aren’t any buttons I could push that would give you different results.

Staff member
One more thing - if you need a good, free image editor, I like Irfanview. Here is the link:
Title: IrfanView - Official Homepage - one of the most popular viewers worldwide

Staff member
Mike, You might want to try printing to a PDF. Then you can pull up the PDF and see how it looks, might print better that way.

Thanks guys, I will give the PDF thing a try first and then image editing last.

Thanks again. I did the PDF thing and finally got it to work.

Only one problem with the PDF thing is that when I saved the file as a PDF it only saved the picture of the vessel view and none of the other views such as the rings, segments, etc. I thought the whole file would be saved. Any thoughts?

Staff member
If you want to print out the pages with the layout of all the rows you need to go to ring view. That should be the nine th icon from the right up at the top, or to the menu > view > ring view.
You try print that out or to a PDF. When you are in the program you only see the row that is currently picked. Whe you print you print all the rows unless you specify only the rows you want.

Thanks for your help with this Bob. I am aware of the rings button and I can order a print from it of all the rings or whatever ring(s) I want .

My print preview is fine, but the problem I am having is that the rings print out black with a touch of color showing on the rim. I can only print to a PRN file on my printer dialog window with my printer, so unable to print to a PDF file there.

I have been able to print out the rings in Segment Pro with no problems because they are automatically saved to a PDF file which my printer likes. I also managed to save the bowl view in WTP to a PDF file and print that out ok. My printer just doesn't like the WTP bowl and ring views. BTW I did print out the wall profile picture directly from WTP without any problems, but the bowl and rings don't work.
Last edited: Jan 17, 2018
T

I have experienced the same printing problems but found the solution to be adjusting the display resolution. Using a new laptop with high resolutions for example my laptop recommends using 1920 x 1024. When I reduce the resolution to 1600 x 900 the print preview and printing comes out correctly. I suspect the reason is printing a graphic generated at such a high resolution to a printer that is not that high will have problems with what pixels it trims. So use Settings -> Display to reduce the resolution until it works correctly. I also changed the Scale and Layout percent to size the screen display closer to what I am used to. After printing a project I change the display settings back to where it was.

I had not seen this problem, but seeing that changing video resolution changes the output shows that the problem is occurring downstream from the software. For printing, we simply render the output and use standard print routines and the operating system takes over using the print driver supplied by the printer company.

I have a couple suggestions which may affect the output. First, update the print driver. If you have an early edition of a specific printer, the driver surely has issues that were resolved in later versions.

Second, the printing process sometimes is, as Ted suggested, based on screen resolution. We use OpenGL for rendering and the video drivers have all had issues with their OpenGL procedures which have been resolved in later versions. Updating the video driver is always a good idea and it wouldn’t surprise me that this will resolve the issue.