The story so far


the feature ring is a barely twist design constructed using the scroll saw and the stack cutting method. 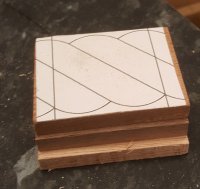 here i have stacked the timbers i am going to use to construct the feature ring meranti as the background and the walnut and sapele as the rope/barley twist each layer is 8mm thick. On the top is my repeating pattern i drew out in cad, to get the print out the correct size i use a program called big print that lets you scale anything to the size you want it down to the mm.
Once I've stuck all the layers together with double sided tape i cut along the pattern with a number 3 blade on the scroll saw at 90 degrees for this pattern. I then pull then separate the peices and using a mixture of the layers i am able to create the design.

was messing with pyrography to highlight the pattern
i am still undecided, i kind of think i might look like i was trying to hide bad joints if i did


Once I've glued the new layer together i laminated it onto a backing piece of timber in this case its meranti and then i can finally cut my segment very carefully to construct the ring, when cutting out the segment i have to be very careful to get the pattern in just the right place that when glued the pattern lines up correctly. To glue up this ring i use the rub method by where you put the glue on then rub the two pieces together till you feel it grab and make sure its all line up, then put to one side and leave for a bit.I found that by the time id done the last one the first one was dry enough to glue up again 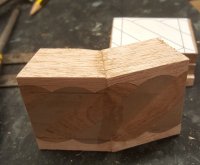 not too bad in all but i have one bad alignment which was kind disappointing but its not easy getting them all perfect on continuing pattern, guess that side will go to the wall 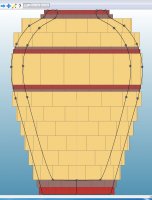 after 4 hours i had all the rings cut and glued up (feature ring precariously on the edge of the saw lol, pat on the back martyn) 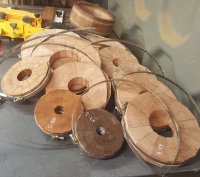 i wrote the time at which each ring was glued up thinking i could make a better assessment if the glue was dry after clamping up, but it took that long it was irrelevant anyway by the time id Finnish

Towards the end of the day i started gluing together the ring, for my base I've decided to use a maple plug surrounded by a walnut ring here i cut the plug and the ring at a angle of 12 degrees. originally it was meant to be the sapele ring but on flattening the ring i decided the walnut grain was much nicer than the plain old sapele so i reversed it, so its now walnut on the very top and bottom for the vase 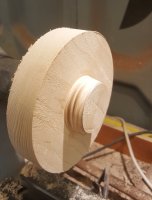 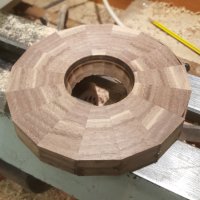 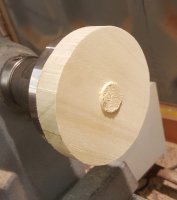 i then flattened the walnut top ring 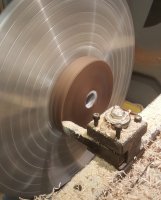 and glued together the rings 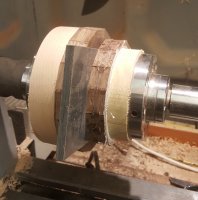 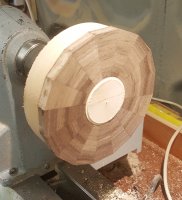 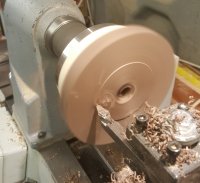 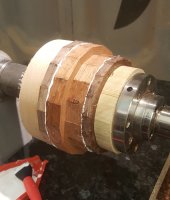 1 hour later i trimmed the sapele layer down to 12mm on both sides, but on the base i again left a raise section for location of the next meranti ring and on the top i cut a recess into the meranti ring to locate into the top 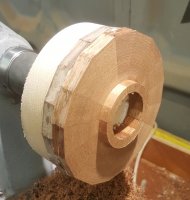 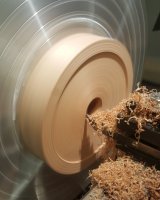 and then glue the next ring on 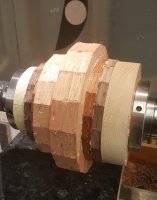 this is where i am at, any question or comment appreciated 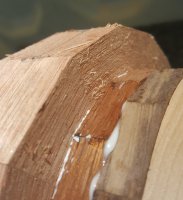 Great job with the post Martyn. Your feature ring looks like it would require a lot of planning and precision.

Looking forward to following your project.

Thanks Glenn was worried i might have over done it a bit, in regards to the feature ring yes it can be hard to get it just perfect, hence i failed with that bad joint which was really disappointing. Even if you get all the joint bang on they do slowly get worse the more you turn away if you line isn't horizontal it would be easier to seperate them withe a slice of wood but i like the pattern to follow continously around the bowl/ vessel

I like a design that also presents a challenge, that's how you grow as a woodturner.

Staff member
Martyn, thanks for the detailed photos. It is a fun project to follow

Staff member
Thanks Martyn for starting a post in Follow Along Projects. This is a great place for us all to learn new things

Yes i too like to push myself in doing difficult things, its a great feeling when you succeed, i do appreciate any criticism and advice along the way. i am not trying to tell how to suck eggs just sharing the process i go through on my project, thanks for the feed back ill keep the post updated to the end finishing process 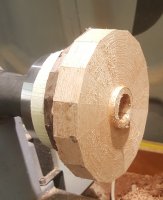 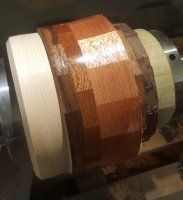 but the meranti ring i had glued on the top section was far too small and had to come off, so I've cut and clamped up a new ring to be attached next time probably wednesday. I was going to glued another ring onto the base section but for some reason it had poped open so i had to cut it in half again and re glue it back together 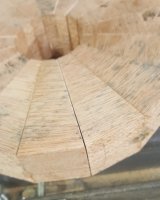 its been really warn and muggy today compared to the damp weather of the past few days i think the change in humidity in the air to blame here. So all in all a frustrating night, all I've done is make a replacement ring and repair another, i did stick a bit of finish on the bit I've made so far just out of curiosity the meranti has a real nice tone to it, i think its gonna look good

Some days are like that Martin, one step forward and two back! It's all about the recovery and how you handle it. Sometimes it presents opportunity sometimes not. It's also great that you share the mistakes and show how you deal with it. WE ALL MAKE THEM.

yes these things are sent to try us, no worries, i make plenty of mistakes just got to get you head down and plough on and keep going, its all good fun in the end

Staff member
As Glenn said we all make them.

It's how you over come and carry on

yes its the journey not the destination thats important

Staff member
Thanks for the posts. I really like the documentation of projects. What a great learning tool for all of us.

Staff member
Yes, we all learn

very true, thank you all for following the project i hope to continue tomorrow as i don't think i will get chance tonight unfourtunety

been watching some you tube videos and i think i might do a floating bottom in my next turning, it seems to make sense when i think about it although i have never had any gaps appear on any of my turning myself I can under stand why the might happen. Back to the vase tonight just got to go to work first, damm work

Staff member
Martyn, a floating bottom is a perfect time to turn a decorative disc designed in lam pro. Making it with the same theme as your feature gives a nice little surprise when looking in the piece or viewing the bottom.

stuart johnson said:
Martyn, a floating bottom is a perfect time to turn a decorative disc designed in lam pro. Making it with the same theme as your feature gives a nice little surprise when looking in the piece or viewing the bottom.
Click to expand...